The right to protest is fundamental to our democracy and enshrined in the First Amendment to the U.S. Constitution. In response to the death of George Floyd at the hands of Minneapolis police, people across the country have taken to the streets to demand racial justice and an end to police brutality and systematic racism against Black people.

Especially in the time of COVID-19, it’s important to know your rights and stay safe while protesting. In this video taken over the weekend at a protest in Brooklyn, New York, Emerson Sykes, staff attorney for the ACLU’s Speech, Privacy, & Technology Project, shares important information on how to protect yourself and others while protesting – and what rights you have when interacting with police. 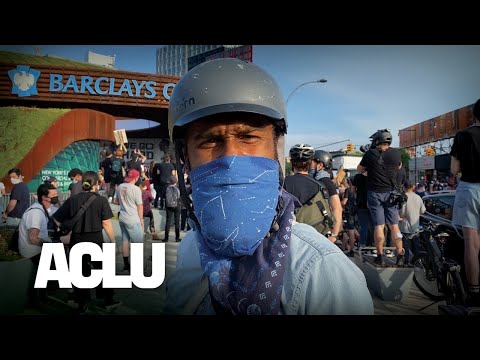 As you come out to protest, here’s what our video notes to keep in mind:

1.  The right to protest is a fundamental human right guaranteed by the U.S. Constitution and the First Amendment.
2.  If you get stopped, ask if you are free to go. If the police say yes, calmly walk away.
3.  You have the right to record. The right to protest includes the right to record, including recording police doing their jobs.
4.  The police can order people to stop interfering with legitimate police operations, but video recording from a safe distance is not interfering.
5.  If you get stopped, police cannot take or confiscate any videos or photos without a warrant.
6.  If you are videotaping, keep in mind in some states, the audio is treated differently than the images. But images and video images are always fully protected by the First Amendment.
7.  The police’s main job in a protest is to protect your right to protest and to de-escalate any threat of violence.
8.  If you get arrested, don’t say anything. Ask for a lawyer immediately. Do not sign anything and do not agree to anything without an attorney present.
9.  If you get arrested, demand your right to a local phone call. If you call a lawyer for legal advice, law enforcement is not allowed to listen.
10.  Police cannot delete data from your device under any circumstances.