Trump Created the DACA Immigration Crisis, and He Could Fix It Right Now 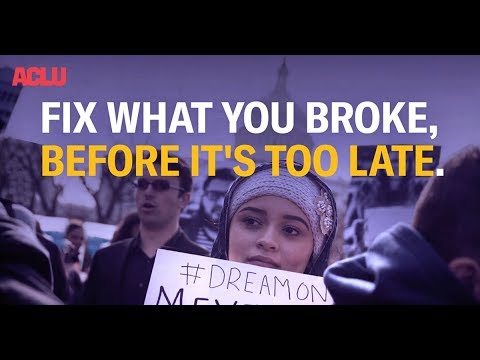 This piece originally appeared at USA Today on Monday, March 5, 2018.

Monday was the deadline President Trump gave Congress to put into law the Obama administration’s Deferred Action for Childhood Arrivals program, and protect nearly 800,000 undocumented immigrants who came to America as children. There's no fix yet to a problem that Trump himself created six months ago when he ended DACA by executive action.

The Supreme Court last week left in place a federal judge's order temporarily continuing the program, thus denying Trump the chance to immediately carry out one of the cruelest policies of his presidency: deporting the Dreamers, as the DACA participants are known. Yet this is only a partial reprieve. Those who have DACA status can apply to renew the permits that allow them to be in the United States legally, but there’s no path for more than 1 million young people who do not already have DACA status and thus have no protection from deportation at all.

Over the last six months, immigrant community groups have had to become experts at suicide prevention as the anxiety of being caught by Trump’s agents becomes overwhelming for some, while thousands of immigrant youth have had to organize to fight for their right to exist in the country they call home.

Sometimes the casualties have been young children. Ten-year-old Rosa Maria Hernandez was taken to a detention camp from her hospital room after surgery instead of being returned immediately to her parents. Cases of young people like Rosa Maria, who could be citizens if Congress passed the Dream Act, but who are instead targeted for deportation, should shock the conscience of any reasonable person.

The reality of Trump’s unnecessary and cruel chaos flies in the face of his words one year ago when he said, “We are gonna deal with DACA with heart,” because, “You know, I love these kids.” He, of course, has the executive authority to fix the problem immediately by restoring the DACA program he ended and stopping his drive to kill bipartisan solutions. Anything less is a callous determination to force mass deportation, which the American people do not want.

Under the Constitution, the president “shall take care that the laws be faithfully executed.” In the immigration sphere, this grants the president the discretion to determine who will and will not be removed from the country. This is precisely what President Obama did in 2012 when he created the DACA program. Obama heeded the views of the American people, who understood that deporting hundreds of thousands of young people who were American in all but paperwork made no legal, economic or moral sense.

In August 2017, more than 100 law professors and scholars wrote to Trump to explain why the DACA program is constitutional. He decided to end it anyway, with Attorney General Jeff Sessions falsely stating that DACA was an “unconstitutional exercise of authority by the Executive Branch” that the federal government couldn’t defend in the courts.

But Trump’s decision was never about the law, it’s about lashing out at hundreds of thousands of young people who now live in terror of being deported. Trump, after all, killed the DACA program, called for bipartisan action, and then killed three bipartisan proposals to address the crisis he caused.

In January, Trump rejected a bipartisan immigration proposal from Sens. Lindsey Graham (R-S.C.) and Dick Durbin (D-Ill.), and White House press secretary Sarah Huckabee Sanders called it “dead on arrival” because it wasn’t harsh enough. After calling on the Senate to develop new proposals, Trump and his staff mobilized to pull Republican votes away from two other bipartisan Senate proposals to protect immigrant youth — killing them too.

Instead, Trump insisted on his own proposals for a huge increase in deportations and detention camps as well as sharp cuts in legal immigration. But his nativist plan failed 39-60, with a number of Republicans voting against it. This is a remarkable failure from a man who says he wants to fix DACA and who never tires of boasting about his deal-making abilities. His track record in Congress on immigrant youth reveals that the opposite is true.

Trump, the man who told immigrant youth that they should “rest easy,” could make good on that promise today by reversing his decision to kill the program. His refusal to do so shows he’s willing to deport immigrants and destroy the lives of young people of color. But his craven effort to push mass deportation could also backfire. Recent polling has shown broad bipartisan support for DACA, and multiple economic studies, including a much-cited CATO Institute analysis, have predicted billions of dollars in losses at the federal, state and local level if DACA is shut down.

After rescinding DACA, Trump tweeted: “Congress now has 6 months to legalize DACA (something the Obama Administration was unable to do). If they can't, I will revisit this issue!” The time has come for him to fix a manufactured crisis of his own making.

DACA Rescission: What You Need to Know