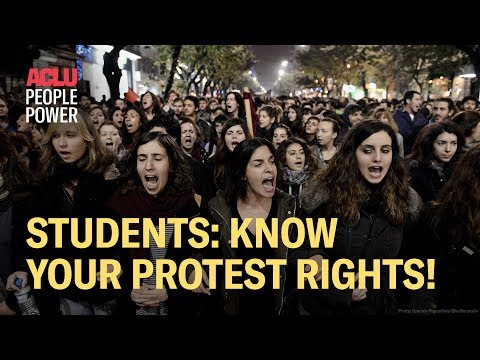 Q: What should I do if the school administration threatens to punish any students who participate in an upcoming walkout?

For example, you might have to serve detention for missing school to attend a protest if detention is the typical punishment for unexcused absences. You also should be given the same right to make up work as any other student who has an unexcused absence for the particular classes you miss.

Q: Am I allowed to express my political views while I am at school?

Yes. The First Amendment of the U.S. Constitution guarantees freedom of speech and freedom of the press to all people, including students. This includes but is not limited to:

Q: Can my school place any limits on my ability to express my political views?

Yes. Even though you have broad rights to express your views in a variety of ways, your school can adopt reasonable rules that regulate the "time, place, and manner" of exercising these free speech rights.

The school is not allowed to prohibit or censor speech or press activities based on its content (what you are saying), unless it falls within one of these two exceptions:

What counts as "disruptive" will vary by context, but a school disagreeing with your position or thinking your speech is controversial or in "bad taste" is not enough to qualify. Courts have upheld students' rights to wear things like an anti-war armband and a shirt supporting the LGBT community, for example. And "content-neutral policies" means rules that have nothing to do with the message you're expressing, like dress codes. A school could prohibit you from wearing hats, but it can't prohibit you from wearing only pink pussy hats or MAGA hats.

Q: Can I organize a protest at school?

It depends on the specific activities you have planned and when the protest will take place. Remember that your school can adopt reasonable rules which regulate the "time, place, and manner" of exercising your free speech rights. Thus, you cannot organize a protest if it will substantially disrupt the orderly operation of the school or if it will create the immediate danger of causing students to commit an act that is unlawful or in violation of school rules. But you can organize a peaceful, orderly protest at lunch or before/after school, for example.

Q: What about protesting outside of school?

Outside of school, you enjoy the same rights to protest and speak out as anyone else. This means you're likely to be most protected if you organize, protest, and advocate for your views off campus and outside of school hours.

Q: Can school officials prevent students from expressing their opinions on a particular topic because they think it is too controversial?

No. School officials may believe that talking about topics like abortion or gun control are too controversial or divisive, but they cannot censor those topics unless it also falls within the exceptions above. Even if discussion would provoke strong disagreement or upset some students, school officials cannot censor it.

Q: What should I do if the school administration threatens to lock or block the school exits to prevent us from walking out of school in protest?

Locking exits to the school can pose serious health and safety concerns for students and staff. In another state, a local fire department responded to teachers' complaints about locked exits by insisting that the administration unlock the exits to avoid a fire hazard. If the school administration threatens to lock students in your school to prevent walkouts, students should immediately notify their parents and the district superintendent's office.

An Open Letter to Alabama Educators and Students

How to Start a Banned Book Club