The right to vote is one of the most sacred civil liberties we have as citizens. We believe voting should be easy for every citizen and that each vote should count the same.

Historically, politicians have used gerrymandering, packing, and cracking to dilute the influence of Black voters. We seek to ensure that the current redistricting process allows Alabama's Black voters the same opportunities as white voters to elect their candidates of choice, regardless of where they live in the state and regardless of who they vote for.

Redistricting is not something best left to the politicians and the experts. Every voter has a vital stake in redistricting because it determines the composition of districts that elect public officials at every level of government.

NOT SURE WHICH DISTRICT YOU CURRENTLY LIVE IN? FIND OUT HERE.

Q: What is redistricting?

A: Every 10 years, including this year, states redraw electoral district lines based on population data gathered in the Decennial Census. These district lines determine the electoral boundaries for representation in Congress, state legislatures, and in many county and municipal offices. This process is called 'redistricting.'

Q: What is gerrymandering?

A: Sometimes, people talk about how redistricting can be used to ‘gerrymander’ these electoral district lines. Gerrymandering is the practice of manipulating electoral boundaries to give an unfair political advantage to a particular political party or group.

In racial gerrymandering, state legislatures use race as a predominant factor in drawing districts and do so in a way that is not justified by the Voting Rights Act. This process often dilutes the influence of voters of color. One method involves “packing” communities of color into a small number of districts to weaken their voting power, when they would otherwise be an influential voting block across multiple districts. Districts can also be drawn to reduce the voting power of a minority group by “cracking” the community into several districts that are overwhelmingly white.

Q: What are ACLU of Alabama’s biggest concerns regarding redistricting?

A: Fairness. Legislators must not draw maps that artificially “pack” Black voters into some districts or “crack” Black voters across districts with the intent or effect of diluting voting strength, without analyzing what the Voting Rights Act actually requires. The Committee must also follow the Alabama Constitution’s command to respect county lines except where necessary to comply with the Voting Rights Act or one-person, one-vote. Unnecessarily splitting districts across counties dilutes voters’ power by creating legislative delegations that do not prioritize that county’s constituents. This practice disproportionately denies Black Alabamians local influence.

Transparency. Fair maps require that legislators conduct the redistricting process transparently, and take public input into account. The committee should publicize notice of hearings and instructions for public participation, hold additional hearings to include evening and weekend hours, ensure that hearings are held in locations people with mobility impairments can access, and provide American Sign Language interpreters at each hearing and make it easy for participants with disabilities to request additional accommodations.

Q: What does the Voting Rights Act require when it comes to redistricting?

To provide voters of color with an equal opportunity to elect their preferred candidates, Section 2 of the Voting Rights Act prohibits states from drawing electoral lines with the intent or effect of diluting minority voting strength.

Accordingly, the Reapportionment Committee must ensure that any maps it draws or produces comply with the “One Person, One Vote” mandate of the Fourteenth Amendment’s Equal Protection Clause and Section 2’s “nationwide ban on racial discrimination in voting,” without using either as a pretext to engage in racial gerrymandering.

With preclearance in place, the U.S. Department of Justice cited over 100 objections of “discriminatory changes in voting practices or procedures in Alabama," including at least 16 objections to proposed state or local redistricting plans that would have violated the Voting Rights Act.

Q: Why should this matter to the Reapportionment Committee?

Thanks to the Supreme Court's decision in Shelby County v. Holder, originally filed here in Alabama, this will be the first redistricting cycle without the protections of Section 5 of the Voting Rights Act, which had played a critical role in safeguarding against plans that made voters of color worse off than the existing plans.

Without preclearance, the Reapportionment Committee must affirmatively facilitate a redistricting process that complies with federal mandates in force, including Section 2 of the Voting Rights Act and the Fourteenth and Fifteenth Amendments’ prohibitions on racial discrimination.

Because of Alabama’s stark patterns of voting along racial lines, the Reapportionment Committee and legislature must carry out their obligations under Section 2 of the Voting Rights Act affirmatively in drawing maps, not merely as an afterthought after maps are drawn. At minimum, any maps that this body adopts must preserve any effective districts that are VRA-compliant and also consider whether additional effective opportunity districts are required.

The U.S. Constitution protects against maps that intentionally "pack" or "crack" Black voters — both techniques employed by Alabama in the past to diminish the political power of Black people. 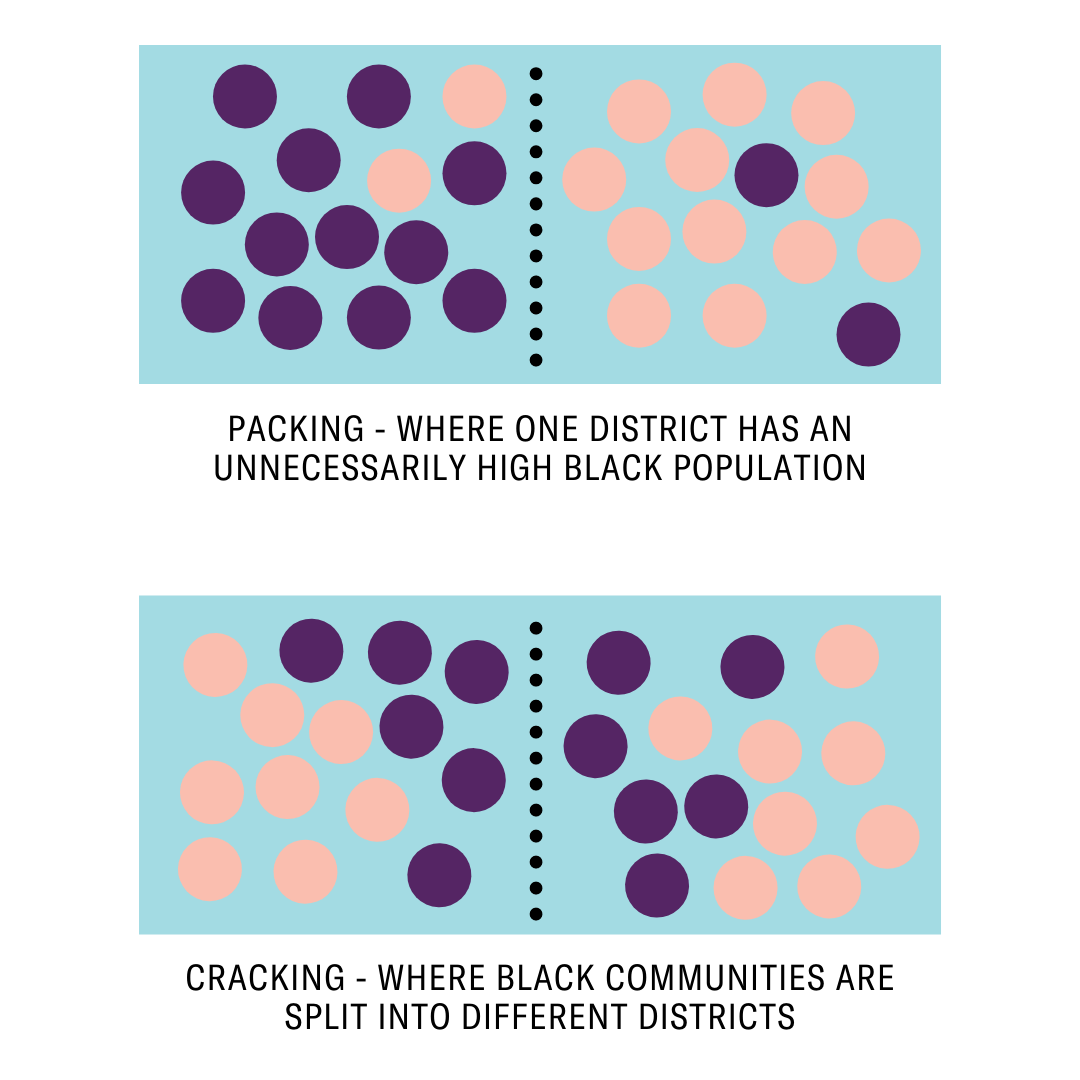 The Black populations in effective Black districts such as Congressional District 7 and in certain state legislative districts must not be cracked such that Black voters can no longer elect candidates of choice in any district in the State; but they also must not be artificially inflated beyond what is necessary for VRA compliance, which could violate the U.S. Constitution.

For example, in the State Legislature, current maps offer evidence of significant unnecessary packing of Black voters into several districts in the Montgomery and Birmingham areas in ways that do not reflect communities of interest and are well beyond the thresholds necessary for Black voters to elect candidates of choice.

By contrast, Huntsville’s Senate districts are currently cracked in a way that artificially dilutes Black voting opportunity. These uses of race are not narrowly tailored to comply with the VRA but rather unnecessarily and improperly dilute Black voting strength in neighboring districts. 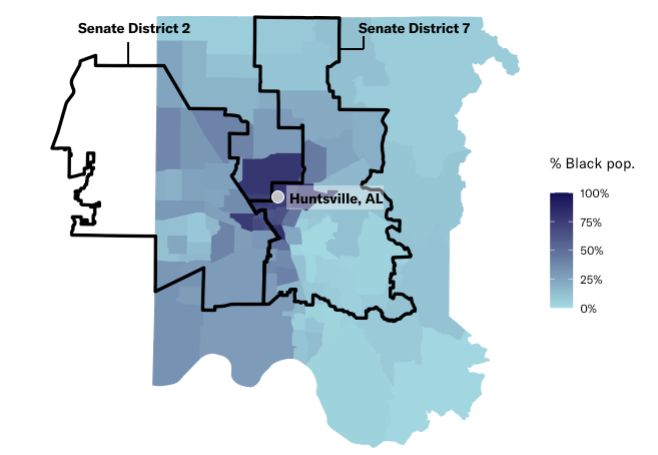 HOW TO GET INVOLVED

Let them know why fair maps are important to you and your community.

Access further information from the Permanent Legislative Committee on Reapportionment, including maps, member information, meeting notices, and more. Minutes from the public hearings will be added later.